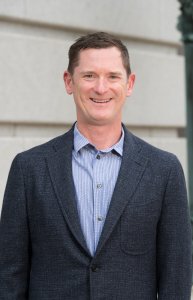 After dental school, Dr. Ferris joined the Air Force and completed an Advanced Education in General Dentistry residency. He also served as a staff general dentist at various Washington, DC area military facilities including the Pentagon and Andrews Air Force Base.

While remaining on active duty, in 2001 Dr. Ferris completed a residency in endodontics at the Oregon Health & Science University in Portland and then moved to Las Vegas, Nevada to become Chief of Endodontics at Nellis Air Force Base. Dr. Ferris received the National Defense Service Medal, the Global War on Terrorism Service Medal, and two Air Force Commendation Medals.

In 2005, he completed his military service obligation, left the Air Force at the rank of Major, and joined the Capital Endodontics team. He has lectured both locally and nationally and has been published in the American Association of Endodontists’ Journal of Endodontics.

Dr. Ferris enjoys spending time with his wife and their two children, as well as running, mountain biking, hiking and downhill skiing.